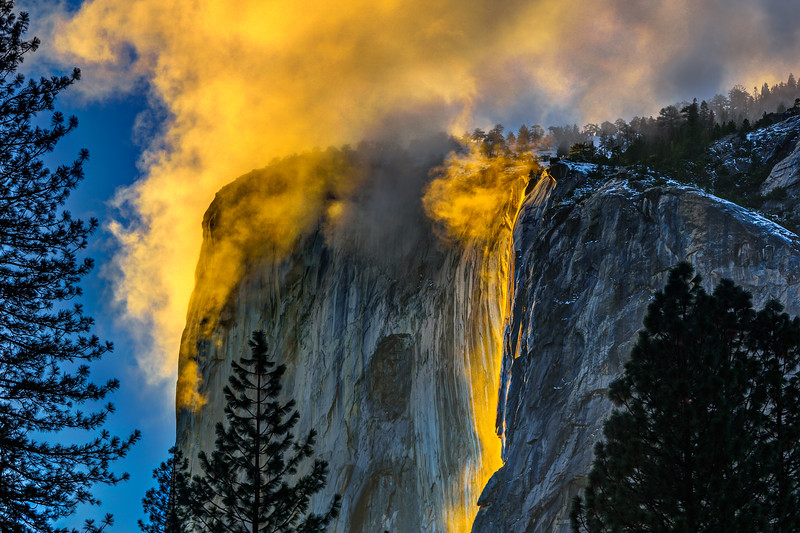 An updated capture of this natural beauty of Horsetail Falls in Yosemite National Park in Winter at Sunset. This ephemeral falls is just a wonder when the right conditions occur. My "Nature's FireFalls" image http://www.jharrisonphoto.com/Portfolio/Landscape-PhotographyPortfolio/i-k296TGL) was my previous attempt at capturing this years ago alone in Yosemite National Park in Winter. Now it has become a national phenomenon as thousands of spectators and photographers set out to capture this wonder. I am so glad I can remember the days when I was alone in the woods shooting this! This year was exciting though as everyone was there to view this little ephemeral waterfall coming over the edge of El Capitan as the sunlight hits the waterfall just perfectly. The clouds on El Capitan were just amazing swirling around the nose almost creating a cloud of fire that looked like another water fall coming down. Horsetail Falls off El Capitan lights up like lava during a brief time in late February. Conditions must be perfect including having enough melting snow on top to create this ephemeral falls. Then you need a clear day! During past many years of the drought, this hasn’t occured often. The last good time was years ago when I captured my “Nature’s Firefalls” image. This past year while up in Yosemite with the family, I ventured out with HUNDREDS of photographers and Yosemite fans to see what might happen. This year we had some pretty phenomenal clouds but not the most flow over the falls. For me just being out there enjoying this was fantastic. Whether you had no camera, an iPhone or a gigantic DSLR with a bazillion dollar lens and tripod it was nice to see so many people outdoors enjoying nature. I won't discuss the downsides or lines or cars, but Yosemite at anytime is fantastic. I didn't process a single Horsetail Falls image due to seeing so many other shots (kinda of like the recent gigantic moon photos!) I let the photos "develop" in my camera to be pulled out and shared at another time. I hope you will enjoy it. It is amazing how this does look like the old fire fall of Glacier Point in Yosemite! #yosemite #yosemitenationalpark #elcapitan #horsetailfalls #waterfall #clouds #amazing #travelphotography #nationalparks